Before the Lightning Bolt

Bolt, Obama and the Lightening Bolt

Long before Usain Bolt electrified the springing world with his track domination followed by his trademark ‘Lightning Bolt’, and definitely well before his photo op with US President Obama in Jamaica last month, there was Oran. “Oran you say…who is Oran?”.

You know who Oran is if you’ve been to Reggae Marathon in person or looked at Reggae Marathon anywhere online. He lives everywhere!  With his flowing Dreadlocks, he’s the true image of Reggae Marathon.  He started out running and still carries the Flag but once he saw the Lightning Bolt, he was inspired to follow suit and do the Bolt.

Oran inspired to do the Lightning Bolt

Before 2001, the first year Reggae Marathon ran in Negril, the Jamdammers Running Club of Kingston was active running around Kingston.  A favourite location was the Mona Reservoir near the University Camputs Dedicated runners all, they came back from running a destination race off Island and asked, “What can we do to promote long distance running in Jamaica?”.  Reggae Marathon was born from the answer to that question.

Reggae Marathon needed a strong, memorable and lasting image.  The Jamdammers turned to Anna Kay, a talented artist and designer, runner and a member of the Jamdammers who designed ‘Oran, the Running Dread’ and the Reggae Marathon logo (That’s the running Oran carrying the flag in the Finish Photo below).  If you’ve run in any of the past Reggae Winners, you’ve seen Anna, our unsung heroine. That’s her standing at the finish line below holding the tape for the 10K Finish.   Both Anna and Oran still going strong as we head into our 15th running of Reggae Marathon this December 5 in Negril.

Lightning Bolt…Dreadlocks…Oran…Bob Marley.  All will be in evidence at the 15th running of Reggae Marathon this December 5 in Negril. 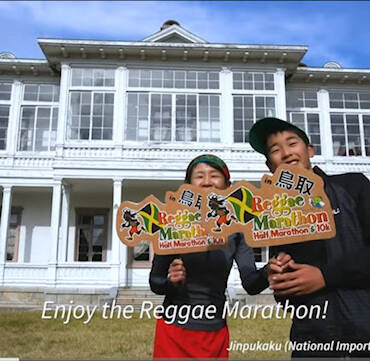