Will Deanne and Tom make it a threepeat at Reggae Marathon in 2015?  It certainly seems so.

On Sunday after Reggae Marathon a group of us were in full celebration mode as we toured a number of Cliff side ‘Establishments’ on our way to capture the perfect Negril Sunset.  As is the case in Negril, we started chatting with Reggae Marathoners Deanne and Tom from Oklahoma.  They were in Negril for their second consecutive Reggae Marathon and shared their story about the accidental discovery of Reggae Marathon in 2013:

Tom and I already had our 2013 trip to Negril planned last year and stumbled upon the race prior to departing Tulsa.  We signed up for the 10k and loved it.  What a great race, from the pasta party to the bagged water we had never had such a good time!.  After we finished we had just enough time to grab a coconut before we headed to the airport.  On the bus to the airport we could see all the marathoners still competing.  We started planning our 2014 trip as soon as we got back.

For 2014, we planned ahead a little better and allowed for several days recuperation before we headed home.  We did the Half Marathon in 2014.  As I mentioned this year we were trying to qualify for the Half Maniacs by doing two half marathons within a 16 day time frame. We had done the Williams Route 66 Half Marathon on November 23rd so the timing was perfect!  We love meeting all of the people from all the different countries and hearing all of the different languages.  We visited with a marathoner from Germany who took our picture before the race and then cheered him on as he flew by us later on.

We are contemplating doing the full marathon for next year’s race.  It seems like the Reggae Marathon would be the perfect place to do our first full marathon.

We look forward to your Threepeat at Reggae Marathon this December in Negril! 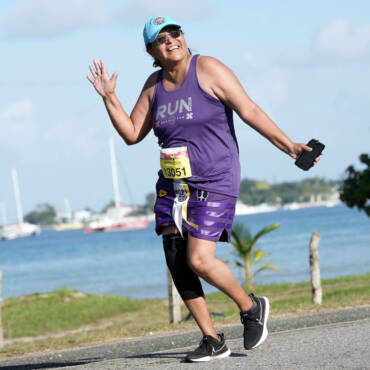